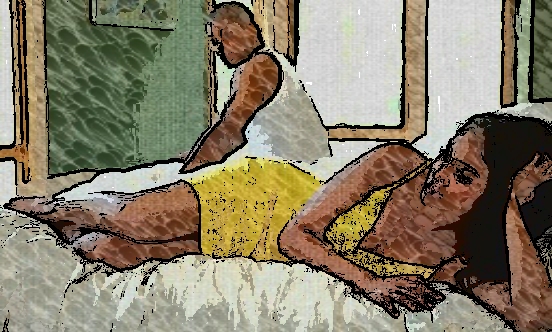 Corinne and James have been friends for nearly 10 years.

That’s not quite the whole truth.

Corinne and James met nearly 10 years ago on a dating site.

That’s kind of a lie too.

Corrine and James met nearly 10 years ago on a site dedicated to facilitating “flings”. A hook-up site. For the sex.

Corinne and James have been having the sex for all these many years.

Corinne is now in her mid-forties and James is in his mid-thirties. They are not young or immature. They both have kids. They both are attractive and intelligent. James is from Mississippi, college-educated, then enlisted in the military. Corinne is a DC native and a single parent who has worked every job known to man. James works out a lot and has a nice body. Corinne is tall and rubenesque with a great laugh. Neither is the others typical “type”. But it works. In the beginning, the sexual chemistry was bananas and Corinne got off a bit on this younger, tight body dude wanting to have the sex with her.

Truth be told, Corinne is a little selfish. She genuinely likes James and loves him as a friend, but she harbors not one romantic feeling for him. No jealousy, no envy, purely platonic (with the sex). And if Corinne is being totally honest, the sex isn’t even that great. Sometimes it is very pleasant, but it’s very basic, not earth-shattering in any way. Corinne tolerates the sex with James because James is a good guy. And over the years, James has proven to be a great support to Corinne and her family.

James seems to be on the same page as Corinne. He often talks about his girlfriend and comes to Corinne for advice. Corinne and James have no secrets between them.

Two years ago, James bought a house with his now-fiancee. Corinne told James that once he and the fiancee moved in together, she was no longer having the sex with him. James told Corinne that they will be having the sex ALWAYS. Corinne laughed. James was so serious. And he was right. After a short hiatus, Corinne ended up giving James the sex.

About 8 months ago, James got caught cheating. NOT WITH CORINNE. James’ whole world imploded. The other woman spilled all the beans to the fiancee and it did not go well. James was apologetic to his fiancee and confided in Corinne that he loved his fiancee very much and did not want to lose her. Corinne told James to “do the work” if he wanted this woman in his life. Corinne and James spent many days and nights talking about what he needed to do to prove to his woman that she was who he wanted to be with. During this time, James told Corinne that she was one of his best friends and he was really grateful to have her in his life. In the midst of all this drama, James’ fiancee finds out she’s pregnant. Almost immediately she moves back home with her mom. James is devastated. Months go by and he is trying everything in his power to get his woman back but the fiancee is not having it. She is done.

Corinne has a lot going on in her life. Corinne meets a man she really cares about.

Corinne and James don’t have the sex anymore.

About six months into Corinne’s new situation, everything falls apart. Corinne is really feeling like no one will ever love her and she shares her thoughts with James. Corrine tells James (via text) that every time she thinks she will have a real partner that it blows up in her face.

James: You got one with me, but you blow me off.

Is James saying that he wants to BE with her? Wait a damn minute.

She doesn’t really know how to answer back. Corinne has no partner-relationship-lovey-dovey feelings for James at all. Like nothing. They don’t even kiss. He’s pigeon-toed and a little bit boring. James teaches muy thai martial arts. James loves video games and comic books and wrestling for God sake! He has no interest in anything creative or cultured. He is kind of a cave man. It would never freaking work. They have absolutely nothing in common except longevity, familiarity and the sex. That’s it.

Corinne is so thrown off, it takes her a full two hours to respond to James’ text.

Corinne: So what I read is that you would like to be my partner? But I blow you off?

Heavy sigh. This will not do.

And she is not trying to diss his feelings, but in her mind she is like, “James! Are you serious?”

Corinne is trying to wrap her head around James’ confession. James is telling her that they are best friends and that he would rather be with her, someone who knows him. And all these dry ass practical, typical Virgo man reasons why they should be partners. James thinks he and Corinne would be a perfect match because neither would be pressing the other one about what they are doing outside the relationship.

Corinne’s thoughts? “Boy, we don’t even kiss and the sex is lukewarm.”

But what she says is, “We need to talk. Face to face.”

A couple of days later, James comes by Corinne’s house and they talk. James is frustrated because he feels that Corinne isn’t taking him seriously. James says he loves Corinne and seems offended that Corinne is not reciprocating that love. Corinne knows that James is serious but she has no desire to be with him. Also, James ex-fiancee is having his baby in less than a month! James is tripping.

Corinne is doing her best to honor her friend’s feelings but it isn’t going well. James seems to think that because he wants to be with Corinne that she should also want to be with him.

She wonders if James thinks that they will be great together because of the sex?

Has the sex gone on too long?

Will James and Corinne and their unconventional friendship survive this expression of love from James?

Wine and Woes
Our Cypher

We dream, build, and create

the epic blog of a father of twins